In its Morbidity and Mortality Weekly Report published on Thursday, the CDC said that from June 2018 to March 2019, 255 people in 32 states were infected with the strain, with 60 being hospitalized and two dying from the infection. 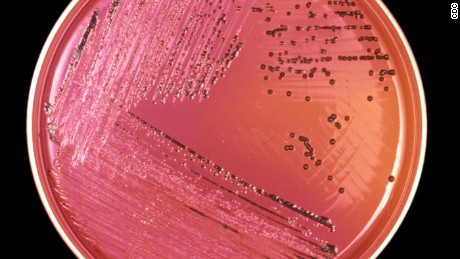 “We are continuing to see cases occurring among patients,” Dr. Ian Plumb, an epidemiologist in the CDC’s Enteric Diseases Epidemiology Branch and the lead author of the report, said in an email to CNN.
“The antibiotic resistance pattern of this strain is alarming because the primary oral antibiotics used to treat patients with this type of Salmonella infection may not work,” he said.
The salmonella infections were linked to beef obtained in the United States and soft cheese obtained in Mexico, suggesting that this strain could be present in cattle in both countries, the CDC found. Eighty-nine of the people who contracted the infection had recently traveled to Mexico.
“To prevent infection, consumers should avoid eating soft cheese that could be made with unpasteurized milk, and when preparing beef they should use a thermometer to ensure appropriate cooking temperatures are reached: 145 degrees Fahrenheit (62.8 Celsius) for steaks and roasts followed by a 3-minute rest time, and 160 degrees Fahrenheit (71.1 Celsius) for ground beef or hamburgers,” according to the new CDC report. 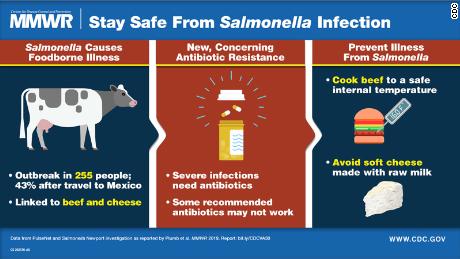 The CDC called the strain “emerging” and said it hadn’t been detected before 2016. The strain didn’t respond to ciprofloxacin and had “decreased susceptibility” to azithromycin — two antibiotic drugs often prescribed to treat Salmonella infections.
Most patients with salmonella infections recover without antibiotics, but those with severe infections need antibiotics. Resistant infections can be harder to treat, and patients may be at increased risk for developing serious complications.
An estimated 1.2 million cases of salmonella occur annually in the United States, with approximately 450 people dying each year because of the infection. People become infected by eating foods such as beef, poultry, milk or eggs, contaminated with animal feces.
Typical symptoms include diarrhea, abdominal pain, nausea, vomiting and fever. Most people experience symptoms within eight to 72 hours after contaminated food is ingested.
The CDC said that avoiding the unnecessary use of antibiotics in cattle, especially those that are important for the treatment of human infections, could help prevent the spread of this drug-resistant salmonella strain.